NOTE: This is an old article I wrote in December 2006, it’s still relevant today. It was originally posted on luckydonkey.com which I am in the process of retiring.

For many moons I have wanted an application like IPTraf for FreeBSD. Well through lack of trying and a certain amount of stupidity I couldn’t find one. All good things come to those who wait… to stumble across things late at night. I was watching an rsync backup happen across the network while reading FreeBSD Forums and I stumbled across Slurm. It’s not quite the same as IPTraf but its close enough… in fact in some ways it’s easier to use.

It’s missing the per port break down and the connection list that IPTraf has. But to be honest all I really want is ascii graphs . It is easier to use in my opinion because it just does what I want.. draws a cool graph and lets me know something is happening when I worried that I fucked something up again . 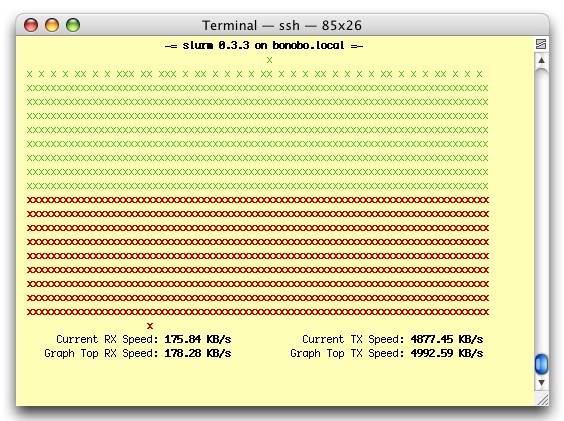 The original article had a number of insightful comments, I’ve included all their corrections but unfortunately not the original comments. Thanks to all those who contributed to make this a better article.