Bullet is an open source collision and physics simulation library written by Erwin Coumans who I believe worked or maybe still does work at SCEA (Sony Computer Entertainment America). Bullet provides a C++ API to a very robust Collision, Rigid Body and Soft body simulation system. At its core Bullet is comparable to commercial systems such as Havok but lacks the art pipeline integration, extensive documentation and support contracts that its commercial rivals offer. For an indie developer it’s an amazing leg up though. Collision is hard to do well. Physics is also hard to do well. Bullet does both very well.

Bullet has a layered compartmentalised design. So my plan was to first integrate collision and later Rigid body simulation. The documentation that Bullet offers is a little sparse but the source package includes a lot of demo code ranging from helloworld to a forkliftdemo to the classic how many boxes can I stack before the physics explodes. While it’s intimidating at first, collision and physics are so core to your game engine it’s important to spend the time integrating exactly what you need, where you need it.

The first thing I would recommend doing is building the bullet source package. Just follow the instructions in INSTALL. It’s worth installing CMake (as they suggest) as without it not ALL the demos will compile.

After compilation an executable called AllBulletDemos will be in in BulletSrc/Demos/AllBulletDemos unfortunately it doesn’t have all the demos in it but it does have a lot of them. Playing around with these demos will give you an idea of what Bullet is capable of and more importantly where to look for sample code. Bullet’s lacks hand holding documentation and you are expected to dig around in demos and find code that is useful to you. 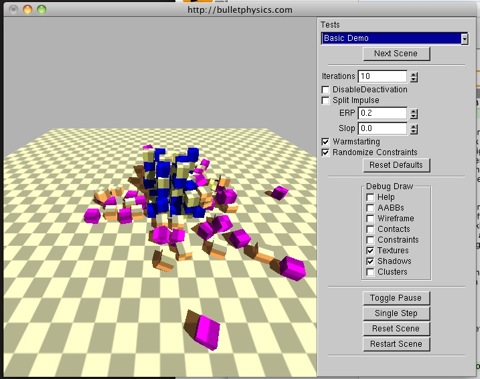 Getting Data From Blender Into Collision

In blender objects marked as Actors with Static selected are static collision meshes. To test for this is your python exporter:

Bullet uses an OpenGL-ish method for submitting a large number of triangles for a mesh. This allows you to create an Index Vertex Array and from that build a Triangle Mesh Shape. One niggle is that the iPad uses 8 or 16 bit index values (GL_UNSIGNED_BYTE, GL_UNSIGNED_SHORT) whereas Bullet uses int (32 bit) indexes. This means you can’t submit your render index list to the collision system. In the long run you wouldn’t do this anyway but it would be nice to be able to use different index sizes.

Adding Meshes To Your Collision World

Once you have created a world you need to populate it with you meshes. Bullet advises instancing meshes if possible and merging non instanced meshes into super meshes. When you instance a mesh you have an opportunity to use btScaledBvhTriangleMeshShape to scale the instance. You can’t scale btBvhTriangleMeshShape.

Since we are adding static meshes there is no local inertia and mass is set to zero (massless entities in Bullet are considered to have an infinite mass and are immovable). We construct a rigid body from the trimesh and the add the rigid body to the world.

Casting A Ray From The Camera

CML has a handy function called make_pick_ray which helps in the process of making a camera space ray which can be projected into world space using the camera’s transform.

Cast The Ray Into the Collision World

This really only covered the most basic form of hit testing. Adding capsules, spheres, cylinders, cubes, convex hulls and compound objects are all supported. I suggest you look at the demos :)

I’ve only really covered the basics here. Bullet is a massive piece of code and if you haven’t played with a physics system before I really think you will struggle. The forum is a help but tbh both collision and physics are hard so you shouldn’t expect it to be a walk in the park. If your time isn’t cheap it may well be worth paying for a solution.