For reasons that are obscure even to me, I felt the desire to unarchive some old DAT tapes that have been sitting around my house for the last 20 years. They were backed up with Retrospect backup about 20 years ago on an old PowerMac 7100/80 when I worked at a company called The Multimedia Corporation (now defunct).

I looked at the DDS2 tapes on FreeBSD and it said they were blank (using tar) but I couldn’t be sure that Retrospect wasn’t writing to the tape in a non standard way. So I could either look at the tape as a raw character device and maybe get some data from it or install OS9 and Retrospect on my old G4 and restore the tapes. The latter should be easier! Plus the thought of actually reverse engineering the Restrospect tape format (which is as far as I know completely undocumented) was a bit daunting. Especially if there was an easy out.

Installing OS 9 on to my G4 was a total PITA because of duff ISOs and a lot of duff information around. The ISO I found that did work for me was from WinWorld. It’s MacOS 9.2.1 and definitely supports that Sawtooth G4. I did a complete Universal install (you need to select custom install in the Mac OS installer). This does mean it boots a little more slowly but at least it works and you can move the drive to another OS9+ compatible computer and boot.

Before stumbling upon the WinWorld ISOs I tried many Toast files and it took me a long time to learn that you can’t burn them in OSX and have them boot on old world Macs. I also learned that you can’t turn them in to ISOs, burn them and have them boot in old world Macs. Many CDs lost their lives in the pursuit of this knowledge. I also learned that the netboot image floating around the internet boots but is unstable on my G4! I got to the point where I started to suspect my old G4 had a hardware fault. Despite it running flawlessly in OSX 10.4 is qould rarely run for more than 5 minutes in OS9.

Once MacOS was successfully installed I jumped through many hoops of SCSI<->SCSI connectivity and adapter to connect my DDS3 drive to my G4. I downloaded an old copy of Retrospect and… yep, you guessed it… the tapes were blank. Either I had blanked them, or I never backed up to these tapes or the tapes are dead and Retrospect is reporting them as blank (this seems unlikely to me). So anyway, lesson learned, just watch TV over christmas and don’t have plans! I know I have at least another 5 tapes somewhere in the house so I’ve left the setup ready to go if I ever stumble upon the tapes.

Here is an action shot, sometime around 3am on Christmas Day with my FreeBSD machine open so I can run a SCSI cable to the internals of the Mac. Another partial success! 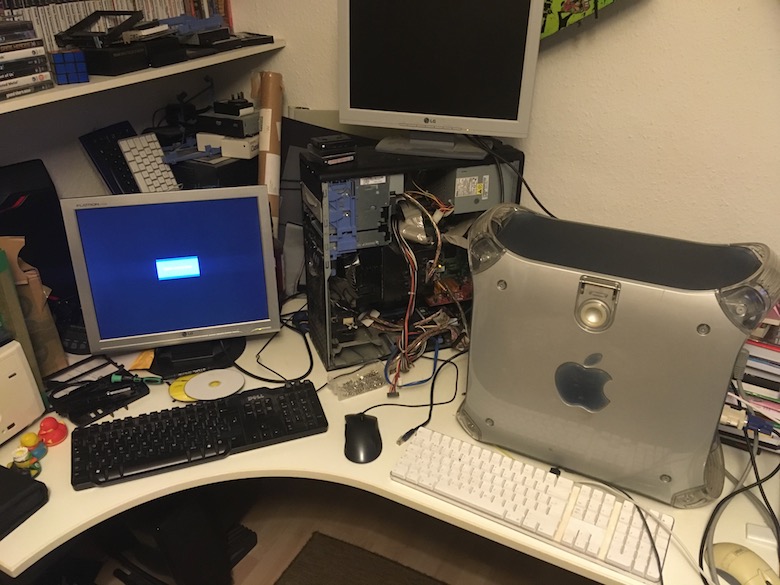 Interesting to me is that my G4 has an accelerator in it. I totally forgot that I bought this. It takes it from 450MHz to 1.4GHz… yes giga! It was one of the factors that I thought could be causing the various OS9 installs to crash. Along with swapping out the HD, Memory, all PCI cards, CD-ROM and the AGP card. I had a lot of trouble finding the spec sheet on Other World Computings website so it’s here but the original from OWC is here (for now).

Hope this helps poor soul who wants to use their G4.

As an aside I discovered on Boxing day that my G5 no longer turns on and just clicks when the on button is pressed. I have no idea where to start diagnosing that. A future blog post I guess